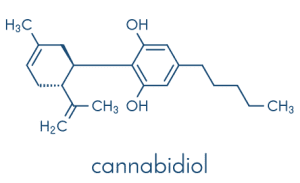 It’s not a stretch to say that CBD (Cannabidiol) is one of the most exciting and promising compounds currently being studied by the medical and scientific communities. Although government regulatory agencies have not yet ruled on the use of CBD education to treat many of the symptoms and conditions it’s currently being investigated for, the FDA did make headlines recently for approving the first CBD derived medication to treat certain forms of severe epilepsy.

In the meantime, misinformation and confusion about CBD still abounds due to the relatively recent emergence and widespread awareness of this fascinating compound. Let’s take a deep dive into what Cannabidiol (CBD) is, and exactly what it does and doesn’t do.

What Does CBD Stand For?

CBD is simply short for “Cannabidiol”, the second most abundant Cannabinoid molecule produced within the Cannabis (Hemp) plant. The most abundant molecule, of course, being THC: the psychoactive chemical famous for making users feel “high” (note that CBD does not have this effect). Keep in mind that your body already has an Endocannabinoid System, an extremely important molecular system that your body uses to regulate and perform various critical functions. CBD binds to receptors in this system; our bodies were designed to interface with Cannabinoids from the very beginning we even naturally produce them!

How Does CBD Work?

As we stated earlier, your body already has a wildly complex Endocannabinoid System that affects several different areas and functions. That system is rife with “receptors,” sites that await Cannabinoid molecules presence. When the Cannabinoid nears, the receptor will bind it to itself, creating a sophisticated chemical interaction that modern science is only just beginning to scratch the surface of understanding.

Unlike its sister molecule THC, CBD does not make you feel high, but don’t think that a lack of psychoactive or intoxicating effects means that nothing is occurring. On the contrary, it’s very clear that there are many chemical responses that occur when CBD binds to those Cannabinoid receptors. That being said, the Endocannabinoid System is ubiquitous in the human body, affecting nearly all major functions in some way (especially homeostatic regulation). Because of this, it’s quite a task to discern everything that CBD does, precisely, when the binding occurs. That’s where the research is at right now: trying to solve that mystery.

Though they share the same source plant family (Cannabis), there is a huge difference between CBD and THC both in the effect they have, as well as the way they chemically interact with your body. Until recently, CBD was somewhat stigmatized and not taken seriously as a potential medically therapeutic agent due to its chemical proximity to THC (the chemical that creates an intoxicating “high”). Now that those barriers are coming down, CBD is finally being scientifically explored in full for the first time. When it comes to CBD vs. THC, let’s set the record straight once and for all.

What is CBD Oil Used For?

Before we discuss some uses for CBD Oil, we should clear up one area of confusion: what is CBD Hemp Oil, exactly? CBD Hemp Oil is simply the natural extracted oil product of the hemp plant, a non-psychoactive species of the cannabis family. Although CBD oil can also be derived from the psychoactive species (Cannabis) as well, those oils can end up containing higher traces of THC, which is not ideal for all CBD users. That’s why all the CBD products – CBD education found on SaferCBD.com have been derived from only organic industrial hemp plants.

The human Endocannabinoid System, which CBD appears to directly interface with, has a profound influence on a myriad of different areas and functions in our body. Therefore, the scientific community is hard at work trying to understand if and how CBD education can regulate or directly affect our Endocannabinoid System to provoke positive effects in the body.

The fact is that new research is being performed and published on CBD education every single day, and we don’t quite know definitively how or to what extent it works but the potential is astounding. The financial sector is certainly betting on CBD hemp oil’s continued popularity: a recent Forbes article estimated that the CBD market will grow 700% by 2020.

Not a week goes by these days without CBD grabbing a headline or two, and the news is fascinating as clinical studies continue to delve into the mystery of this unique compound.

Besides the huge amount of research being performed on CBD at this very moment (much of it funded by the United States Government), anecdotal reports of happy CBD users have flooded the internet and captured the attention of the global media. Although anecdotal reviews should always be taken with a grain of salt compared to peer reviewed scientific research, it’s hard not to get excited when you read the testimonials from satisfied Safer CBD customers.

On top of all of that, the World Health Organization conducted an exhaustive report in 2017 on the public health impact and efficacy of CBD. Their conclusion? CBD is safe and non-toxic to use, even in extremely high doses.